Cambodia country has its own set of rules, regulations and procedures for permits to aircraft wishing for landing or even entering their air space, whether you’re operating a private flight or general aviation, charter flight, scheduled or non-scheduled operation, passengers or cargo trip, a technical or traffic landing, Prior Permission is mandatory required the application procedures requiring complete flight information and Aircraft documents

According to cambodia civil aviation authority aeronautical information publication (or AIP) any aircraft owner/operator intent to fly in Cambodia airspace request has to submit for Cambodia Overflight Permit to air transport department at least 48 working hours prior from flight departure schedule. Always include AFTN on your flight plan, but you’ll only need an overfly permit from Cambodia.

Planning to make a passenger flight landing or technical stop, Cambodia Airports Authority have their own regulations regarding the issuance of flight Cambodia Overflight permit as there is generally a payment involved. The charges normally payable would be the Route Navigation Facility Charges for overflight and also landing and parking charges in case of aircraft making halts.

Cambodia is a signatory to the Chicago Convention therefore the conditions of flights and crews should strictly be compliant with ICAO general rules of international air traffic and in accordance with their regulation for transport of troops, equipment, materials and dangerous goods, please write us for more detail information.

We do not charge any type of hidden cost in Civil Aviation Permit Processing Cost and Cambodia Overflight Permits Procedures. Our fee is straight and direct without any additional fees in Cambodia Overflight Permit We do not require large upfront deposits or commitments. We strive to develop long term relationships and we work hard to earn your referrals. Besides receiving essential financial monthly reports these very particular customers expect to entirely rely on professional teams and they offer just that. This trust is earned through our administrative and financial control, as well as our services standards of work.

Our proficient flight support team offering unrivalled support services to any International & Domestic Airports in Cambodia along with their expertise, our permit2fly team can arrange Cambodia Overflight Permits for Ad-hoc Charter Flights, Scheduled Airline Seasonal Block Permits from Civil Aviation Authority of Cambodia according to their legal time frame.

Trust Permit2fly, to handle all your ground supervisory at Bhutan airports and obtain Bhutan overflight and Landing permit for any of your aircrafts to operate in the territory of Bhutan.

Cambodia, or Kampuchea, officially known as the Kingdom of Cambodia, is a sovereign state located in the southern portion of the Indochina peninsula in Southeast Asia. In Cambodia, ancient and modern worlds collide to create an authentic adventure. The economy is dominated by garment-making, but tourism is expanding, and Cambodia hopes to tap into offshore oil and gas reserves.

International borders are shared with Thailand and the Lao People’s Democratic Republic on the West and the North, and the Social Republic of Viet Nam on the East and the Southeast. The country is bounded on the Southeast by the Gulf of Thailand. In comparison with neighbors, Cambodia is a geographical contact country administratively composed of 20 provinces, three of which have relatively short maritime boundaries, 2 municipalities, 172 districts, and 1,547 communes. The country has a coastline of 435 km and extensive mangrove stands, some of which are relatively undisturbed. 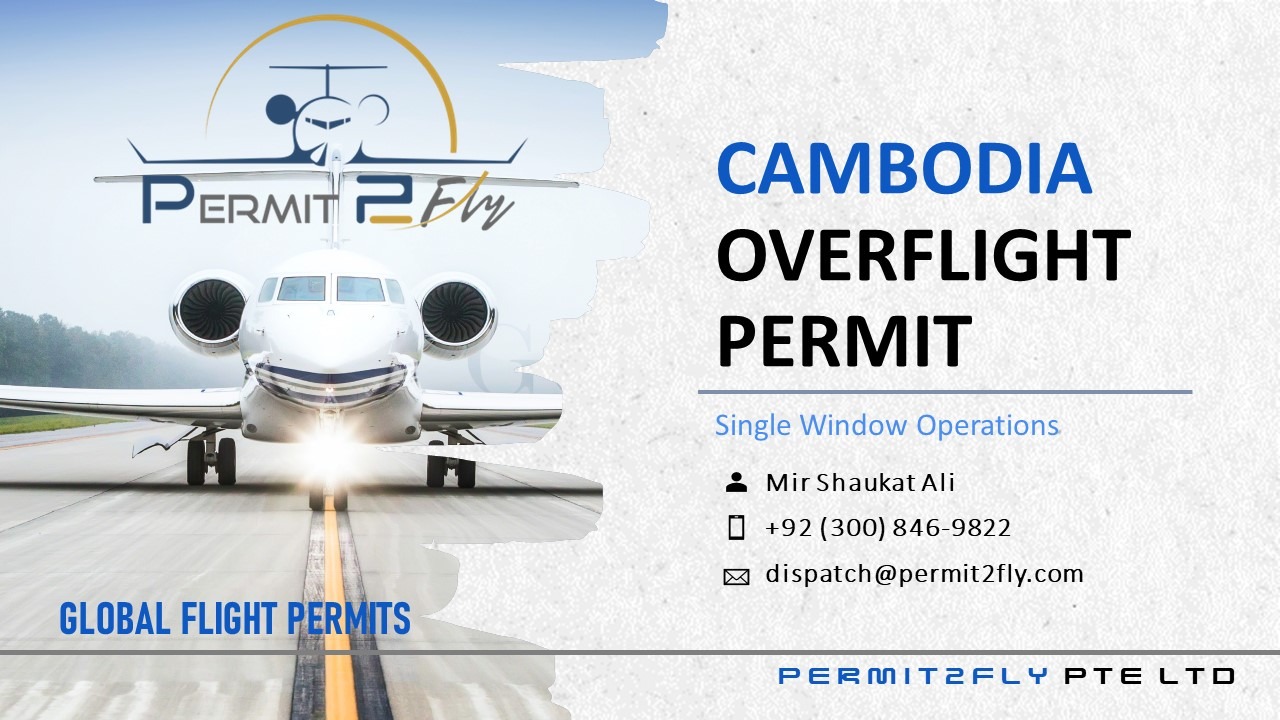 The Given Below Information Is Extracted from the Cambodia AIP

Procedure Of Submission a Flight Plan


A flight plan shall be submitted in accordance with ICAO Annex 2, 3.3.1, prior to operating any IFR or VFR flight.


Except for repetitive flight plans, a flight plan shall be submitted at lest 30 minutes prior to departure, taking into account the requirements of ATS units in the airspace along the route to be flown for timely information.


An alerting service is, in principle, provided to flights for which a flight plan has been submitted.


I-ICAO flight plan forms are available at AIS units and airport offices. The instructions for completing these forms shall be followed.
II-Flight plans concerning IFR flights along ATS routes need not include FIR boundary crossing estimates. Inclusion of FIR-boundary estimates is, however, required for off-route IFR flights and international VFR flights.
III-When a flight plan is submitted by telephone, teletype or fax the sequence of items in the flight plan form shall be strictly followed.

Note 1-If a delay in the departure of a controlled flight is not properly reported, the relevant flight plan data may no longer be readily available to the appropriate ATS unit when a clearance is ultimately requested, which will result in an extra delay for the flight.

Note 2-If a delay in departure or cancellation of an uncontrolled VFR flight is not properly reported, alerting or search and rescue action may be unnecessarily initiated when the flight fails to arrive at the destination aerodrome within 30 minutes after its current ETA.

Whenever a flight for which a flight plan has been submitted is canceled, the appropriate ATS unit shall be informed immediately.

In the case of diversion, insert the "arrival aerodrome" between "destination aerodrome" and "time of arrival".


Flight movement messages relating to traffic into or via the PHNOM PENH FIR shall be addressed as stated below in order to warrant correct relay and delivery.


ATS airspace are classified and designated in accordance with the following:

Class B. IFR and VFR


Flights are permitted, all flights are subject to air traffic control service and are separated from each other.


All other airspace Class G. IFR and VFR flights are permitted and receive flight information service if requested.

When an aircraft subjected to an act of unlawful interference must depart from its assigned track or its assigned cruising level without being able to make radiotelephony contact with ATS, the pilot-in-command should, whenever possible:

1- Attempt to broadcast warnings on the VHF emergency frequency and other appropriate frequencies, unless considerations aboard the aircraft dictate otherwise. Other equipment such as onboard transponders, data links, etc. should also be used when it is advantageous to do so and circumstances permit.

2- Proceed in accordance with applicable special procedures for in-flight contingencies, where such procedures have been established and promulgated in Doc. 7030, Regional Supplementary Procedures.